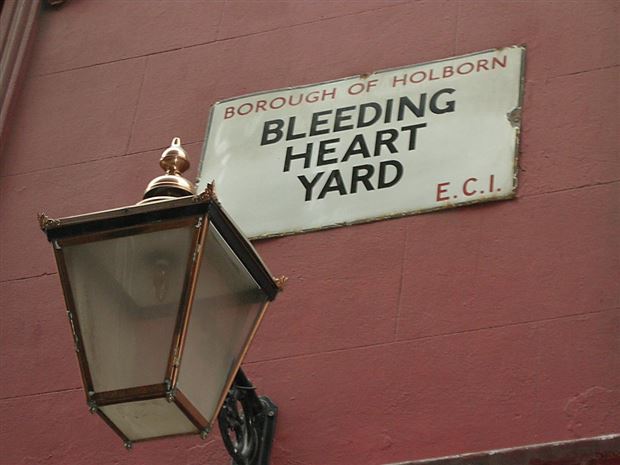 There's no better place to celebrate Halloween than in London. Here's the lowdown on London's macabre past

We start off our 31 days of Halloween with a trip to the Bleeding Heart Yard, a little cobbled courtyard situated in Farringdon within the ancient city of London.

How could this place not be haunted.

One of the most haunted places in the city of London, the legend was born in the 17th century. A young woman known as Lady Elizabeth was  found here one morning. She had been mutilated the previous night but her heart was found to be still beating. It is said that on some nights you can still here her cries for help.

Of poor Lady Hatton, it's needless to say,

No traces have ever been found to this day,
Or the terrible dancer who whisk'd her away;
But out in the court-yard — and just in that part
Where the pump stands — lay bleeding a LARGE HUMAN HEART!
—The Ingoldsby Legends.

The Bleeding Heart Yard also features in Charles Dicken's Little Dorrit,where it was home to the Plomish family.

It is described in the book as

"A place much changed in feature and in fortune, yet with some relish of ancient greatness about it. Two or three mighty stacks of chimneys, and a few large dark rooms which had escaped being walled and subdivided out of the recognition of their old proportions, gave the Yard a character. It was inhabited by poor people, who set up their rest among its faded glories, as Arabs of the desert pitch their tents among the fallen stones of the Pyramids; but there was a family sentimental feeling prevalent in the Yard, that it had a character "