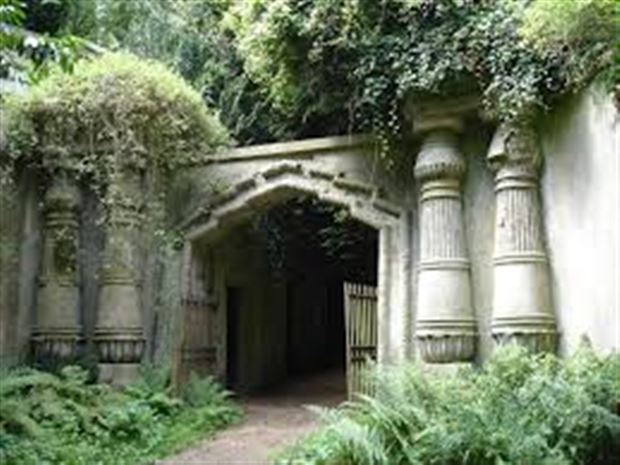 Highgate Cemetery is one of the "Magnificent Seven" Victorian cemeteries of London built to deal with the influx of the dead into the city. Mortality rates were at an all time high and little space to bury them.

This gothic paradise and place of rest is an absolute must see. What better time to visit than Halloween? Located in North London there are 170,000 people buried there in the West Cemetery and East Cemetery.

The cemetery is a haven of gothic tombs and buildings and is divided into two sites; the East and West Cemetery. Access to the West Cemetery is by guided tour only. Some of the highlights include the Egyptian Avenue a structure of 16 vaults on either side that is entered through a great archways. Each vault contains 12 coffins. The Circle, created around an ancient Ceder tree of Lebanon is a series of twenty vaults built in the classical style and has featured on many television shows such as Penny Dreadful.

Opened in 1839 it has become home to many notable people including Karl Marx, Stella Gibbons, Lucien Freud, Bob Hoskins, George Michael, Christina Rosetti, Henry Gray amongst many others.

Highgate Cemetery is not just home to ghosts. It was once home to a vampire too.

The legend of the Highgate Vampire was first reported by the media during the 1970's after reports of supernatural activity in the local area.

"On the night of Halloween 1968 a graveyard desecration by persons unknown occurred at Tottenham Park Cemetery in London. These persons arranged flowers taken from graves in circular patterns with arrows of blooms pointing to a new grave, which was uncovered. A coffin was opened and the body inside "disturbed". But their most macabre act was driving an iron stake in form a cross through the lid and into the breast of the corpse."

This event became linked with the Highgate Vampire nearby many people reported seeing a grey figure within the cemetery at night. Many people believed there was a vampire King in the cemetery. This legend exploded when a mob assembled at Highgate cemetery to drive out the vampire, local police had to be called out to control them. Several months later, the headless remains of a woman's body was found near the catacombs. Police suspected that her body had been used for black magic.

The Vampire is said to still be at large, the most recent sighting was in 2016.